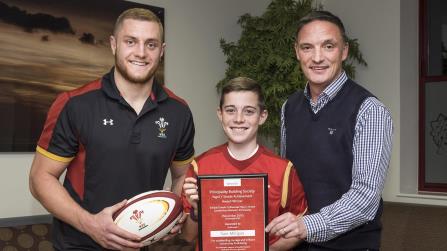 A schoolboy from Llanelli got an extra special surprise from a Welsh rugby star who presented him with an award honouring his fundraising efforts for a local breast cancer ward.

Sam Milligan, a year eight pupil at Ysgol y Strade, was presented with Principality Building Society’s Achievement Award by Welsh international rugby player James King, after he raised £2000 for the Peony Suite breast cancer ward at Llanelli's Prince Philip Hospital. After his mother Heidi Milligan was treated for breast cancer at the hospital, Sam started fundraising through charity cycle rides, receiving the support of his school mates, family and teachers with donations along the way.

Visiting Prince Phillip Hospital to hand over his fundraising cheque to the ward, Sam had no idea he would also be presented with the inaugural Principality Building Society Achievement Award, with an Ospreys player on hand to do the honours.

Wales’ largest building society Principality currently work with Ysgol y Strade through its Business Class scheme, a business engagement programme for schools across Wales aiming to help develop life skills and financial education in young people. After hearing of Sam’s outstanding fundraising total, Principality launched the Achievement Award, which will now be given to a different pupil every term who has done something remarkable to help their community.

Sure to be the most popular student in school, Sam has won a tour of the home of Welsh rugby, Principality Stadium, as well as lunch in a VIP hospitality box for him and his 23 classmates.

After receiving the special honour from Principality Building Society, 13 year old Sam said: “I was totally shocked and surprised. I was really excited to see James King as he is a great rugby player. My parents were really shocked and extremely proud of me. When my classmates found out about the VIP tour of the Principality stadium they were ecstatic.”

Head of Business at Ysgol y Strade, Daniel Hughes, said: "Sam is an exceptional young man who sets an example to his peers. Everyone at the school is extremely proud of him and his efforts. His determination and passion to support such a great cause has been excellent and we’re proud to say that he’s a pupil of Ysgol Y Strade.

“Being able to surprise him this evening with the Principality Achievement Award gives him the recognition he deserves. Sam is the award’s first winner and has set the highest of benchmarks for the future."

Principality Building Society will be working with Ysgol y Strade for three years through its Business Class scheme, helping to build confidence and aspirations in the young people at the school.

Group finance director of Principality, Steve Hughes, said: “Sam’s achievements are incredible and very deserving of the first Principality Achievement Award.  He is a great example of a courageous, hard-working and driven young person, it was fantastic to meet him and his family, teachers and friends must be so proud.

“It was great to be involved and we at Principality are proud to be at the heart of communities across Wales. We hope the Business Class scheme will further raise the aspirations of young people at Ysgol y Strade and across the country before they enter the workplace. Sam is a great role model.  I’m sure he and his classmates will enjoy a special and well-deserved day out at Principality Stadium.”